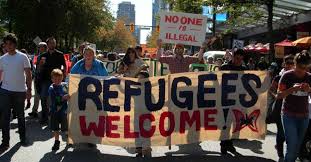 Refugees to Canada: What they Need to Know

This year Canada proudly welcomed 10,000 new refugees. Not all of them will have a successful experience. It’s a fact. Statistics from Canada Border Services Agency show that a small percentage will be removed from Canada every year for breaking the law. We all can play a role in supporting refugees’ successful and safe integration into our communities and reduce this statistic.

I share the statistics about deportation because it’s information that we need to hear now, as we all work together to help settle these newcomers into our beautiful City. While we are helping them learn a new language, new ways of doing things, new cultural practices, we must also make sure that we help them to learn our justice and protection laws. And the consequences of breaking those laws.

Our agency’s experience with deportation will illustrate why. In 2010 a lawyer came to the John Howard Society looking for help for one of his clients who was incarcerated – a young man who came here years before with his family as a refugee from a war-torn country. Their journey included leaving everything, including extended family, literally fleeing for their lives. After spending years in detention camps they finally arrived in their new home in Moncton. By the time the family arrived here settling in did not come easy or naturally. Suffering likely the effects of PTSD, their coping skills were compromised. The children did not speak English well. They were mocked at school. The family suffered racism in their neighbourhood, and at school. Under their constant struggles, eventually, making the best choices for themselves and their family became a challenge.

Back to the young man who ended up in prison – while serving his sentence, he was identified by CBSA as meeting conditions for removal from Canada. That’s where we were invited in. During his time in prison we worked alongside the young man, with Corrections Canada, the family, CBSA, and lawyers, meeting monthly for over a year, doing whatever we could to help the young man meet the conditions to have his removal order stayed and to support his family during this traumatic experience. By late 2011, we would have exhausted all efforts and as a result this young man was taken directly from the prison gates after serving his sentence, escorted to the airport and then all the way back to his country of birth. Without even being able to hug his family goodbye.

Yes, the young man broke the law and should be held accountable. And of course, this is not every newcomer’s story…he is one of a small percentage across Canada who needed more than his community was able to give, or was even aware that they needed to give.

So while I am proud to live in a City that has been so welcoming to refugees and immigrants, I feel a sense of responsibility having lived through that experience to share it with others so that we can make sure it doesn’t happen to any of these new members of our community. I believe that our generosity has to include being willing to make sure that the people we are sponsoring here in our community are made to feel safe here. That feeling of safety comes from being welcomed, when they are settling in and when things start to go bad. Feelings of safety also come from being sure of the laws, and rules, and community norms that one is expected to live within.

If you want to learn more about immigration and the law, the John Howard Society is very pleased to invite you to attend a special event on January 31st at 12:30, at St Bernard’s Church on Botsford Street in Moncton. Mr. Lee Cohen, Immigration lawyer from Halifax, Nova Scotia, will be speaking about his experiences at our first Compassionate Justice Speakers Series events. There will be ample time for questions & answers after his presentation. He is all too familiar with our deportation story, and many others that probably could have been avoided.

Please plan to further support the new refugees by educating yourself, so that you can help others.